Apologies: We were caught a bit off guard by how early the December Kingston Community News came out (November 19; the article is here).  Jeremy Leung is still putting finishing touches on his project presentation, so we will add more graphs and information related to the article to this page soon!  Thank you for your patience and understanding.

Salmon are an important resource for ocean species such as Killer Whales (Orcas) and is even the primary food source for the Southern Resident Killer Whales, an endangered species. All life stages are important sources of nutrition for a wide variety of freshwater and terrestrial species, cycling nutrients from the ocean back to the land for trees and other terrestrial plants as well as for animals.

​Salmon are "anadromous" which means that they breed in fresh water but spend much of their lives in the ocean.  There are seven different species of anadromous salmonids (salmon and trout) in the Pacific Northwest and there is also great variation in the life histories of within and between species, e.g., sockeye can be anadromous or spend all of their lives in freshwater lakes (known as kokanee); other species can have spring, summer, fall or winter 'runs' that are genetically distinct from one another; chum spend only a few days or weeks in fresh water after hatching while coho can spend two years before heading downstream to the ocean.

Salmon have also been culturally important to tribal communities around the Pacific Northwest for thousands of years. Traditions involving salmon extend all the way until the bones are returned to the stream to show they are welcome back.  Five treaties negotiated with Western Washington tribes in 1854-55 guaranteed that the tribes would be able to continue to harvest fish in their "usual and accustomed" places.  Since the 1974 Boldt decision, which, among other things, designated tribes as co-managers of salmon resources in Washington state, various courts, including the U.S. Supreme Court, have continued to interpret the treaty language as meaning  that salmon populations must be conserved and not allowed to go extinct.

There are many places in the Pacific Northwest where one can see salmon moving upstream to spawn. Below are visual aids to help identify salmon in their spawning stages. Salmon look different at different life stages. As juveniles in fresh water and while living in salt water, their main goal is to survive and consume as many nutrients as possible, so they are colored to blend in with their habitat. However, when they return to streams to spawn, their color and anatomy changes.

Cutthroat are a part of the salmon family, however they, like steelhead (an anadramous form of rainbow trout) can survive spawning, go back to the ocean, and return again to spawn several times. Salmon can't do this, they die after spawning once. 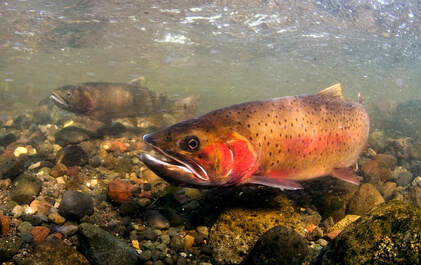 Keep in mind: Salmon have a line that runs down their side that senses vibrations. It's important to stay away from stream beds especially when salmon are present/trying to spawn because the vibrations caused by our movements can disturb their life cycle process or scare them away.
Below is a link to a virtual Kitsap County Salmon Guide flip book. There is lots of general information about salmon and their importance in Kitsap County located here. ​
Kitsap County Salmon Guide