Stillwaters Environmental Center is in Kingston, WA, on the Kitsap Peninsula. We are dedicated to informing and empowering our community to make ecologically responsible decisions. We assist people to achieve sustainability of Earth’s resources  – including both humans and our natural environment.  We use our Carpenter Creek watershed  to teach  about the many interactions  between the plants, animals and humans that inhabit any ecosystem. We foster action  by being a model of sustainability. ﻿We teach citizens practical, everyday changes  to improve the ecosystems in which they live.
More about us, STRATEGIC PLAN & HISTORY

Naomi grew up in Portland, Oregon and is a true Northwest native, with webs between her toes. Although she lived in a very urban setting, she and her older brothers built forts in empty﻿ lots, climbed trees, and created rivers on the sides of the road with every rainfall. Visits from pheasants, opossums, and hawks were not uncommon in their yard. Summer vacations often meant camping in the woods, and a favorite pastime was going fishing on the Clackamas River with her dad and brothers.

In the early 1970’s, she moved to the Puget Sound area. While an administrator on the regional staff of the Lutheran Church in America, she completed a BA in Women Studies from the U. of Washington. Community organizing and social justice work was the focus of her time at Lutheran Social Services of Washington, where she and Joleen were co-managers of the Social Ministry Program.

Naomi followed her creative passion for wood and construction as well, becoming a professional cabinetmaker and furniture builder. Her passion for plants, wildlife and habitat protection has been renewed with the move to Kingston and the formation of Stillwaters.

A founding director of Stillwaters, Naomi “keeps the wheels turning” by handling the administration and fund raising, and overseeing the maintenance and development of the campus. Her happiest hours, however, are spent tending the native plant nursery, sorting and boxing books for the used book sale, nurturing the plants, pets and wildlife here, and bragging to the world about the amazing folks of Stillwaters. 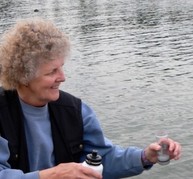 Joleen grew up on the plains of Eastern Colorado in the tiny town of Hugo. Much to her mother’s chagrin, she spent a lot of her time outdoors playing (tackle!) football and baseball with her older brothers and friends. She graduated high school with 23 classmates and moved on to Northern Colorado University where she earned a BA in Education. She decided that before she jumped into the classroom, she would explore the world by serving in the newly founded Peace Corps where she wrote curriculum and taught science in the rural Philippines. Meaningful experiences and relationships created with cohorts and locals influence her systems thinking still today. It was there that she learned how to play the ukulele. This skill would serve her well in the future.

After Peace Corps, Joleen moved to Seattle to teach 6th grade but soon began a career of community organization and social justice work in the Lutheran church, where she met Naomi.

After moving to Kingston in 1992, and learning about the land on which they lived, inspiration struck like lightening on the Colorado plains in a summer storm. The watershed, the estuary, the creek and the woods needed to be protected. The former teacher found herself learning about the ways of the land, creating curriculum, and reaching out to the community.

As the Program Director, Joleen keeps the staff moving forward with big visions of whole systems, place based learning, and eco-system science. Her energy, intelligence and sense of humor are often what keep the rest of the staff from losing their minds. She is always thinking about the next step forward – whether it be in the monitoring program, or her mentoring of UW & WWU interns. If you’re lucky, you might hear her strumming her ukulele and singing … some talents should never lie at the bottom of the creek.