Beach Profiling is a simple surveying technique we use to understand how the beaches in Appletree Cove have changed since the Stillwaters Fish Passage was built in 2012. ​Changes in cove beaches and the channel Carpenter Creek drains into have been found since the culvert removals. The main channel has moved from just off Arness Beach north and now running along the beach on the north side of the cove, before turning to the center of the cove. A new sand spit has extended from the north end of Arness Beach.
​The photos above show in part the process for collecting data during Beach Profiling. Pictured are volunteer Betsy Cooper and Program Director Melissa Fleming. Photos Courtesy of Ann Rivers. 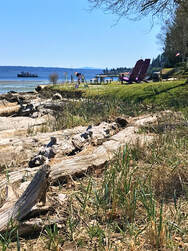 Winter storms and shoreline processes in Appletree Cove left their mark on the cove this past winter. The first on November 13th moved the massive stump that had been resting upside down at the north end of the cove since the winter of 2017/2018. The second storm, two months later, eroded lawn at Arness Park prompting caution tape seaward of the giant Adirondack chairs.

Stillwaters volunteers monitor water quality monthly at Arness Park and people sometimes ask us whether some sort of bulkhead is needed to protect the beach there. Such ‘hard armoring’ of beach-front property became the norm around Puget Sound in the 1950s and 1960s, including in places where it wasn’t necessary. Even when armoring protects property behind it, the effects on beaches in front of it are almost always negative. Waves reflecting off armoring scour sand away from bulkheads leaving behind gravel and rock. Shorelines experiencing moderate erosion are usually better off left alone so eroded sediments contribute to a sloping beach that better tolerates wave action.

Natural beaches are formed and maintained by erosion processes, often happening far away. South Kingston Road is built on a barrier beach that originated from shoreline erosion further south. A segment of shoreline that comprises a sediment source (like an eroding bluff) and a deposition site (like a beach or spit) is called a drift cell. The drift cell ending at Arness Park starts at Point Jefferson: eroding sediment in between is transported north by wave action. Shoreline armoring along the way can deprive beaches in the drift cell of sediment.

Shoreline erosion ultimately benefits beaches, but shoreline property owners sometimes worry they have “too much of a good thing” going on. Fortunately, there are solutions other than hard armor for maintaining beaches and the shoreline processes that provide sediment. At Arness Park, “soft armoring” using dune grasses helps stabilize the beach near the parking lot and could help near the lawn.