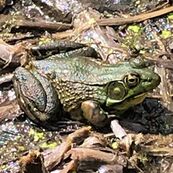 Unlike native tree frogs (Pseudocris regilla) and red-legged frogs (Rana aurora), bullfrogs and green frogs prefer to live and breed in permanent ponds and lakes. Because permanent water often has fish that prey on frog eggs, these species delay breeding until the water warms enough for their eggs to hatch in a matter of days rather than weeks.

Bullfrogs were introduced to the west coast more than 100 years ago as a food species and spread widely across lowland areas from British Columbia to California. How and why green frogs were introduced to the west is less clear, but there are long-established populations in southern B.C. and in Washington’s Whatcom and Stevens counties. These populations appear stable, suggesting green frogs do not spread as readily as bullfrogs - without human assistance. Green frogs in North Kitsap were first noted in Carpenter Lake in 2015 and confirmed by WDFW amphibian biologist Marc Hayes in 2019, who deemed them more likely to have arrived in Kingston via bucket than natural dispersal.

Bullfrogs’ large size, dispersal ability, and voracious appetites for anything that fits in their mouths make them a well-known threat to native wildlife. Green frogs are half the size and their ecological impacts, even where long-established, are not yet known.
​
To document the distribution of this newcomer to Kitsap, Stillwaters is asking the public to report where green frogs (and bullfrogs, for comparison) are seen or heard. So far, we have accounts from all along Barber Cutoff Road, the Grovers Creek Salmon Hatchery, and the North Kitsap Heritage Park.

As a critical first step in evaluating the impacts, if any, of introduced frogs, local amphibian biologist Tom Doty wants to conduct a population study of our native amphibians. He is looking for a landowner with a pond who will let volunteers put up a temporary fence to monitor the comings and goings of breeding frogs and salamanders and their offspring.

How to Identify a Green Frog (images shown above)

​​Green frogs and bullfrogs can be distinguished from our native Pacific tree frogs and red-legged frogs both by prominent ear drums readily visible behind their eyes—larger than the eye in males, smaller in females (in native frogs the ear drums are smaller and obscured by a dark ‘mask’). Green frog calls are also very distinctive and have been described as a “banjo twang." To hear recordings of green frog, bullfrog and native frog calls, visit Whatcom County’s Amphibian Monitoring Program website: https://whatfrogs.wordpress.com/ and check out their ‘Species Facts’ and ‘Chasing Invasives’ pages. To learn about features distinguishing introduced green frogs and bullfrogs from native species in Kitsap, see our Native vs Introduced Frogs pdf HERE.