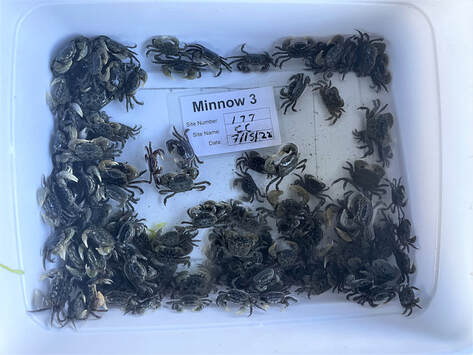 Followers of Stillwaters’ activities have heard a lot about two non-native ‘green’ animals over the years. One, the European green crab, is considered an invasive species because its introduction “does or is likely to cause economic or environmental harm” (National Invasive Species Council). Green crabs have been in the news lately because they are expanding their range into Puget Sound and are a known threat to fisheries and shellfish. The other ‘green’ non-native, the Northern green frog, is not considered invasive in Washington (unlike its larger cousin the American bullfrog) despite having been introduced from eastern North America over 100 years ago.

Right: Typical haul of 229 native hairy shore crabs from one of six traps set in the Kingston Estuary monthly April to September to monitor for invasive European green crabs) 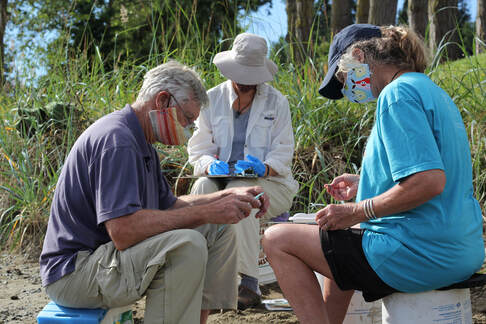 For the last seven years, Stillwaters volunteers have worked with Washington Crab Team monitoring the Kingston Estuary for invasive green crabs and have found none so far. More than 50 volunteer ‘Crab Teams’ operate throughout Puget Sound and not all have been as fortunate. In May, a team near Seabeck captured a green crab in Hood Canal, the southernmost location in the Sound they’ve been discovered. WDFW crews captured another 13 within the week, but none since. Vigilance and rapid responses remain key to keeping green crab from establishing populations in Puget Sound.

(Left: Stillwaters volunteers identify the species and sex of each of the 500 crabs - on average - captured monthly and take measurements of a subset.  All have been native species so far.) 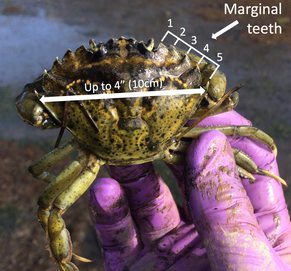 You can keep an eye out for European green crabs both in the water and as molts (cast-off shells) on the beach.  They can be most easily distinguished from our native crabs by the number of ‘marginal teeth’ behind each eye (Image on the Left). Green crabs have five on each side, compared to only three on the shore crabs and ten on the ever popular Dungeness Crab (Images Below).

Crab Team asks you NOT to kill any suspected green crabs you may find, but rather submit photographs to allow professionals to confirm the identification so native species are not inadvertently harmed. They also have a Green Crab Hotline: 360-358-3561.